Welcome to the Liv Dolls Wiki

The Liv dolls include Sophie, Katie, Daniela, Alexis, Hayden and a boy, Jake 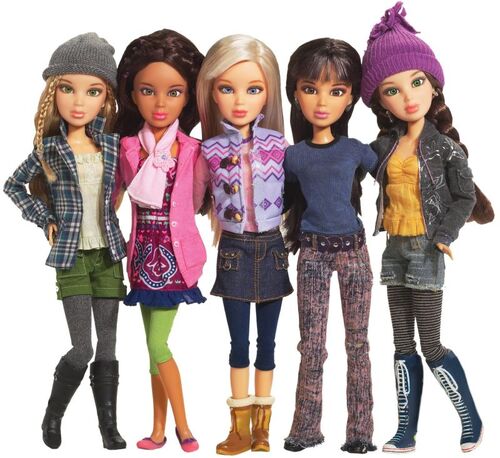 The dolls with 14 points of articulation are sold with the tag that they can do 150 poses. The 14 points of articulation are – 2 wrists, 2 elbows, 2 shoulders, 1 head, 1 waist, 2 legs, 2 knees and 2 ankles. Not all dolls from all the waves (releases) had all 14 points. Some dolls with knee joints have kneecaps! The other features that identify these dolls is that they have belly buttons and the toes are visible on the feet.

The 2012 Brites wave of Liv dolls were not articulated with 14 points.

The four original dolls are - Sophie, Alexis, Daniela and Katie - others times there are references to the three main characters - these are seen as - Sophie, Alexis and Daniela.

The official site is at http://livworld.com/ . This site is working in August 2014, despite the fact that the dolls were discontinued.The following sites are listed in no particular order:

Other sites with good information include retailers such as eBay and Amazon. Pictures of accessories such as the wigs, were viewed at online retailers and the details summarised on this wikia.

Community content is available under CC-BY-SA unless otherwise noted.
Advertisement